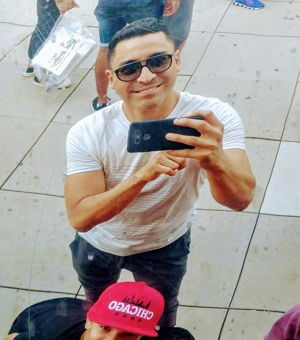 In his past life, Del used to dream of working the in video game industry and being a character designer after he received his degree in Illustration in Chicago, so he packed up and moved to San Francisco. One earthquake later and the weather in Chicago didn't seem so bad AT ALL. Now back in Chicago, Del continued his studies and got a further degree in Web Design/Development.

After working in corporate for a while, Del randomly took a Salsa dance class and life changed FOREVER. After his employer lost the account he was working on, Del was let go and needed to figure out what was next. At this point, he had already joined a dance troupe after falling head over heels in love with dancing and made a choice.

Del began working as a Ballroom dance instructor and soon became a full-on Ballroom competitor...yes, like "Dancing with the Stars." While he learned a lot, he also longed to return to his first dance love, Salsa dancing. So he Co-opened a Salsa dance studio in Chicago which last 11 years. During his studio time, Del used his design skills to be the in-house graphic designer/web designer/WordPress person. He then, by sheer necessity, learned about SEO and quickly became obsessed with his site's ranking and how to better display his business. Once he became adept at SEO, Del took on some clients on contract and added SEO to his skill set.

Then Covid happened, and the studio and partnership dissolved. Del began looking for ways to use his skills which lead him to Inbound! One conversation with Michelle and now he comfortably works remotely with cool people on SEO projects which feed his inner-nerdy side.

As for dance? He's still at it and now also runs a Salsa studio (yes, it's hard right now) as well as two dance companies as the trainer, director, and choreographer.